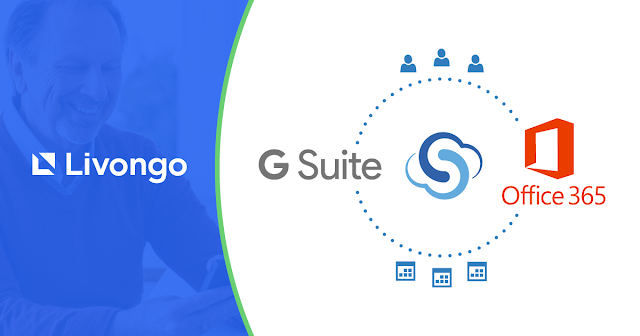 Find out how SyncGene Enterprise was used to solve Calendars and Contacts migration case while working on both Office 365 and G Suite.

Livongo is a healthcare company, which offers a digital health management platform that empowers people with chronic conditions to live better and healthier lives, beginning with diabetes and now including hypertension, weight management, diabetes prevention, and behavioral health.

Lately they started acquiring other companies and merging with them. Naturally, all new companies that were acquired had to join Livongo’s eco-system. Old companies, which had, for example, Name 1 and Name 2 domain names, were deemed to switch to Livongo’s domain address and software, services of their choice. Livongo themselves have been using Microsoft Office 365 for quite some time now, however acquired companies were on a different platform. Specifically – Google G Suite accounts.

Implementing Microsoft Office 365 for newly acquired companies was a big win for Livongo. All employees being on the same platform meant increased productivity, ease of communication and other benefits. However, they ran into problems once new employees started using Office 365. Those employees were still receiving emails, meeting requests, scheduling new calendar appointments to their old Google G Suite accounts. They still had their old Google accounts configured on their phone where they would add data (Calendar items, Contacts). Friends, co-workers, family members would still send them emails or meeting requests from external email addressed to their old Google accounts. Because that is what they were used to.

There were several approaches implemented to accomplish what Livongo needed and keep these two accounts on two different platforms in sync for the full transfer period.

Emails were the easy part. Both these platforms allow to setup specific forwarding rules for incoming emails. That was exactly what Livongo did. They have setup email forwarding rules, so that all incoming emails to the old Google account would be automatically forwarded to the new Office 365 mailbox. This took care of the email problem. All new employees since could reply to those forwarded emails from their Office 365 account and continue the communication through their new email address. Exactly as intended by Livongo.

But what to do with calendar appointments and contact lists,which were still stored on Google? For some employees it is years-worth of data. Unfortunately, Google does not allow to transfer calendar or contacts data to a different account or a different platform natively. Continuous sync is out of the question as well, even if there was a way to somehow do the transfer.

This is where SyncGene came to the rescue. Each new employee got their own SyncGene account, provided by Livongo. Each SyncGene account was configured to sync data (calendars and contacts) between Google and Microsoft Office 365. The solution was completely automatic. All new employees could see their old calendar and contacts data from Google appear in their newly created Office 365 accounts. Furthermore, even if by accident, or on purpose, they would create new contacts or new calendar events, make changes to existing ones on their Google accounts – the changes would soon be transferred to Office 365 by SyncGene. No important meetings would be missed as well, even if the request came from an external address to an old Google account. With a help of SyncGene all calendar data would end up in one, main Office 365 calendar for the employee to see.

This allowed each person to have a smooth transition from one platform to the other. Allowing not only to do a one-time data transfer from Google to Microsoft Office 365, but keeping those accounts in sync for some period of time, until the old Google accounts were completely transitioned out of employee lives by Livongo.

SyncGene App is also available on Google Play Store and Apple App Store, so you can download it on your Android or iPhone devices.
SIGN UP FOR FREE
The software you can trust
Live Chat +1 (954) 796-8161 Give Feedback